Book 3 in the Layers Trilogy 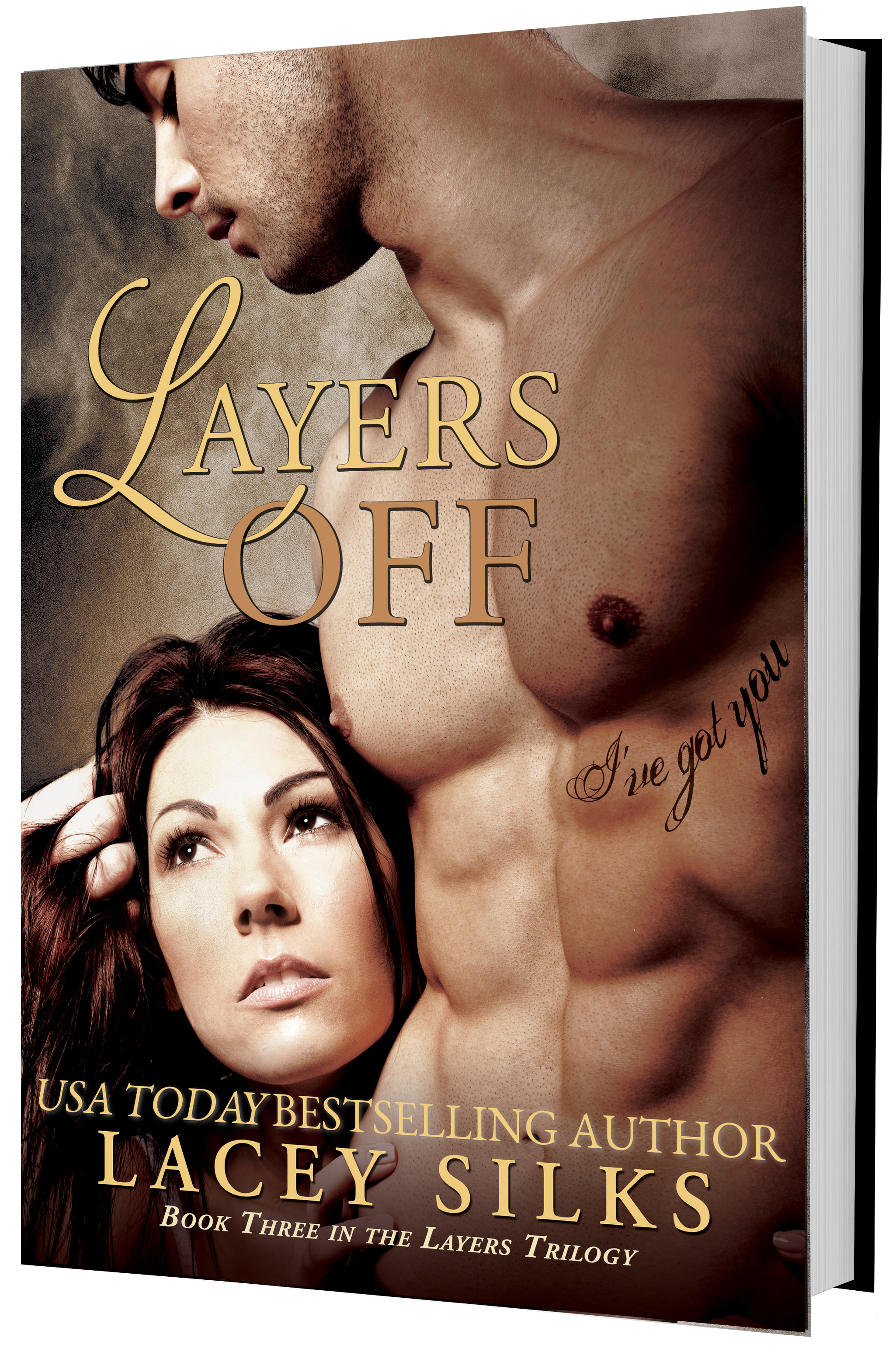 She’s gone through hell and back.

He’s kept a secret that could send her there again.

And they’re fighting their way back to each other.

Bullied, lied to, tortured, sold, used and abused, Kendra Knight has lived a life like a never-ending nightmare until the man she loves finally rescued her. Memories of her imprisonment as a sex slave haunt her daily, yet she struggles to remember her past.

Julian Cross, owner of a top investigations firm, has kept a secret from the woman he loves since the day he met Kendra. He watched her grow and fall in love with his brother Tristan, only to be broken into pieces in the end. Now, he vows to stand by her side until she’s well again, so that he can finally tell her the dismal truth about their pasts.

Will the truth finally set Kendra free or will it break not one, but two hearts?

Read Kendra and Julian’s story of beating the odds in the final novel in the Layers Trilogy, Layers Off.

Note: This book is the third book of a Trilogy that is designed to be read in order.
Warning: Intended for adult audience.

Books in the Layers Trilogy 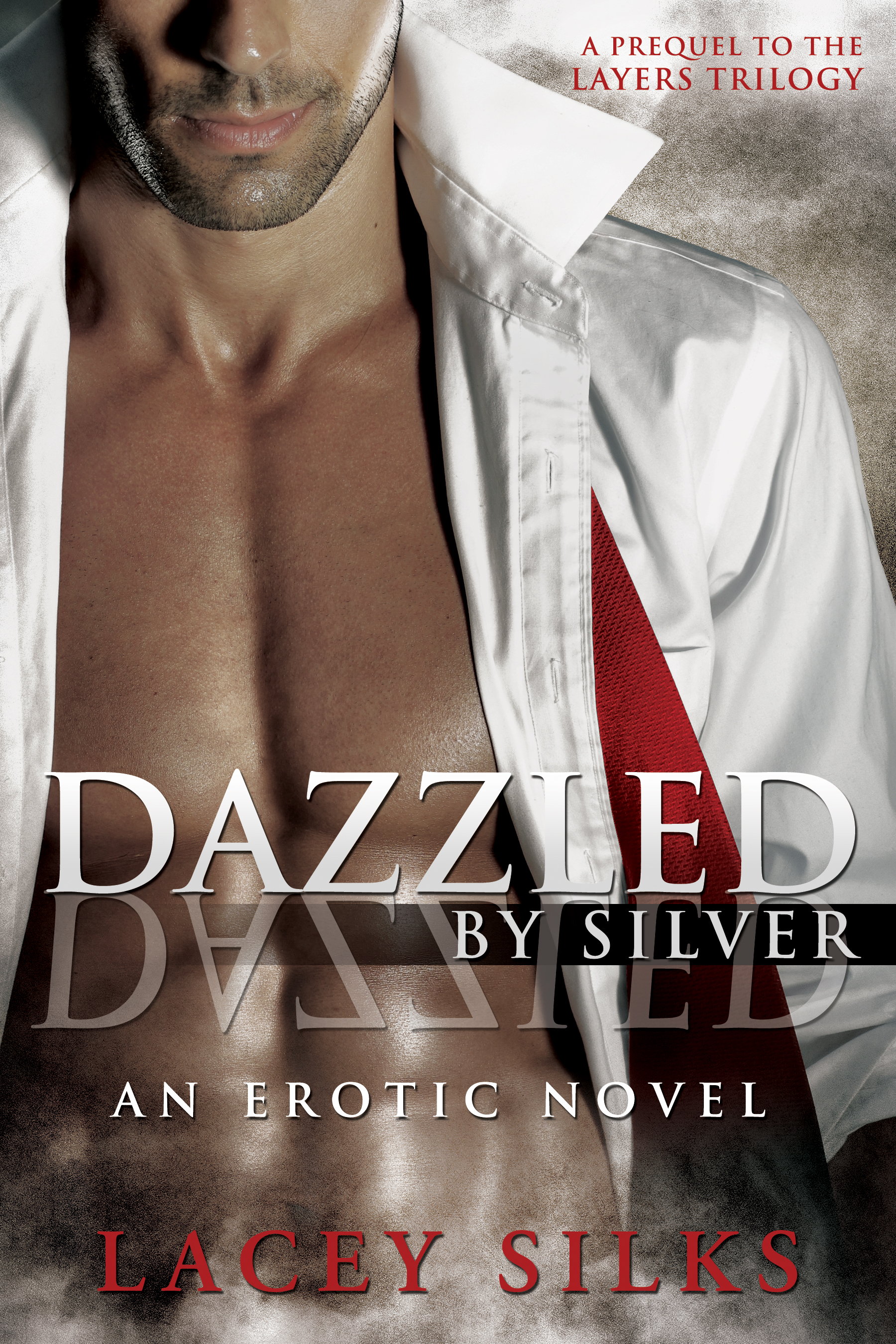 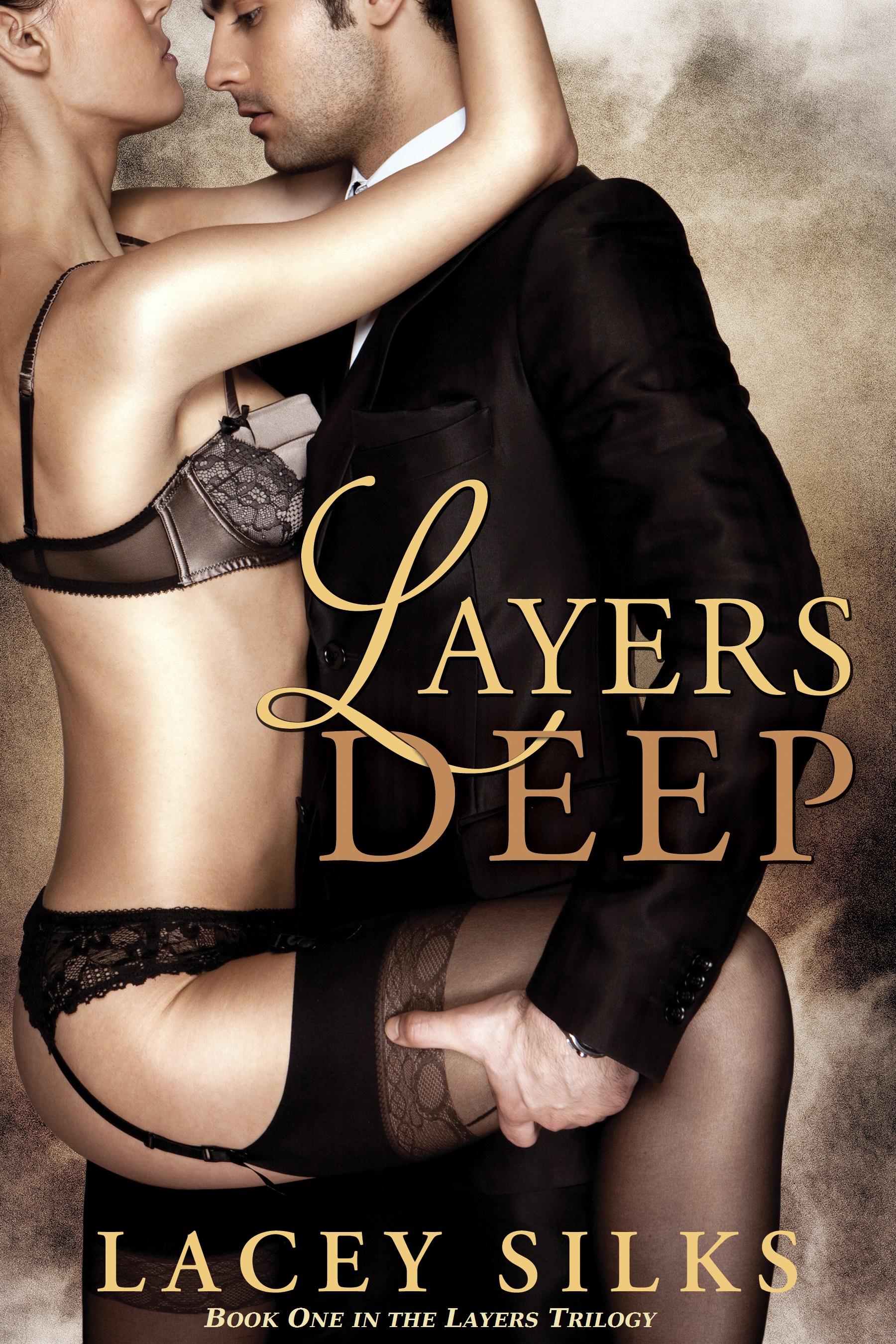 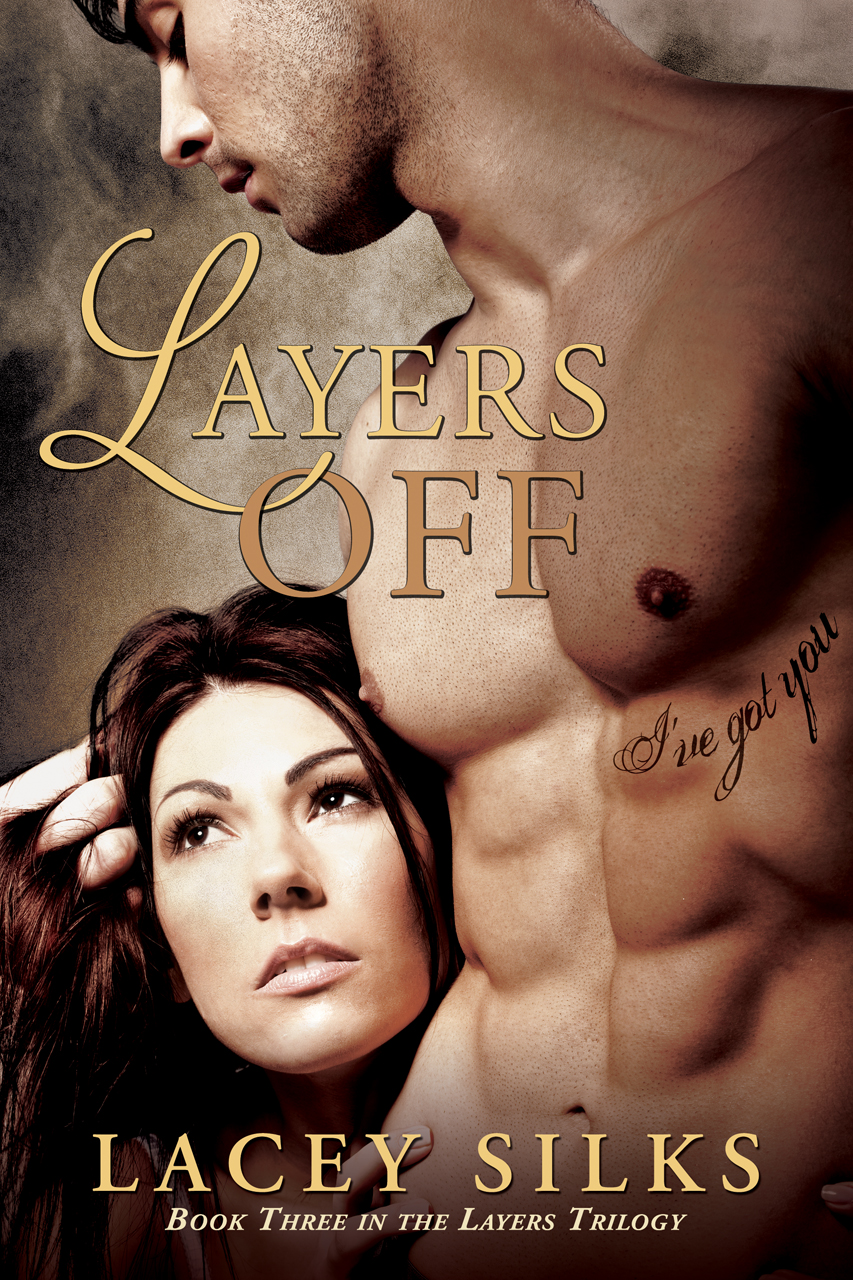 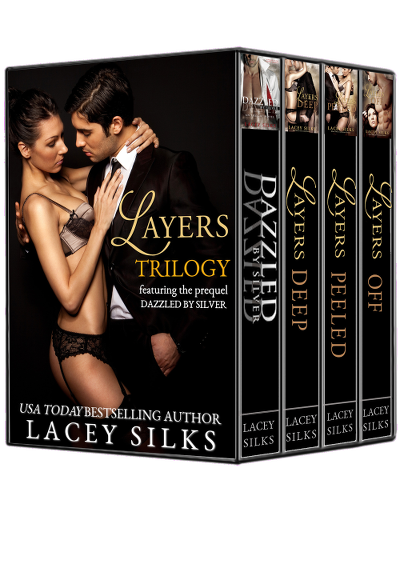 Death was my only escape. I wouldn’t give up on the Grim Reaper until I could taste earth in my mouth. I didn’t want to go on, and I prayed for darkness to take me away. Inside, I was broken into pieces – every ounce of my being shattered like tempered glass. Yet here I was, alive, wishing the doctors and everyone else would stop trying to put me back together, because I was convinced the task was impossible. At least not until I remembered my entire past. Not until those unanswered questions around my parents’ death were no longer a mystery. That shadow over my hazy memories needed some sun. But for now, I chose to grasp at the chance to forget my miserable life in any way I could, and death was the clearest answer to accomplish that.

The corner of the room had been my safe zone for the past six days. My back hugged the little nook where the two wall sides joined. With my knees pulled up to my chest I held my arms around them, squeezing to ensure my whole body wouldn’t leave the safe perimeter I’d imagined. At least I thought I’d imagined it; it couldn’t be real, could it? Since Allie had found me at the hotel, the line between reality and make-believe was blurred most of the time. Drugs still cruised through my veins like a virus, fusing in the middle of my brain. They’d fed them to me like candy. My arms were showered with bruised patches the needles had left. Now the oval spots were turning green – a bit more pleasant than purple, at least.

At times I was back in that dark room in which I’d been held captive, listening to the clatter of unlocking chains, screaming women, and crying girls: their wails still rang in my ears. But once the narcotics made their rounds to each cell, the skin-cringing sobs stopped. The prisoners either passed out on the floor or were too stoned to know how to let their voices be heard. Those times I stayed in my corner, quiet, pretending to sleep; praying they wouldn’t pry my mouth open to feed me the drugs. They’d sneaked enough into my body with the little food I got to eat.

Once it quieted, only a faint hum of the flowing water outside remained. We had to be close to a river. But I didn’t exactly know where. Each time they prepared us for a job, our eyes would be covered.

I fought against the need to sleep that month. In my stoned state, I was haunted by nightmares. Each dream seemed like a forgotten memory of someone being shot: the gun held tightly in my hands; blood leaking from the little spot in his back. He turned to look me dead in the eyes. There was something familiar about those dark grey eyes, yet I couldn’t identify them.

In my cell, moisture flowed down the earthen walls. The space resembled a medieval dungeon. Sometimes I thought I’d stepped into a time machine, but after a while, I knew it was the hallucinogens I’d been given. Luckily, I’d managed to hold on to a piece of my past to realize I hadn’t been a whore my entire life. At my lowest, my memories drifted to a happier time, full of deep laughter, fresh smells, and carelessness – but even those were becoming scarce. I knew I had days if not hours left in me. And if I hadn’t been saved, I’d be dead – such a wishful thought at the moment.

Right now my body shook. The trembles returned when I thought back to my month-long imprisonment by the lords of the sex trade. Jitters of fear and hopelessness embodied me. It was all too much. I didn’t know whether I could go on. I didn’t want to. As much as my body needed some kind of powdered boost, I hoped the pain of withdrawal could kill me. Even if I had drugs, I wouldn’t take them. I needed the feel of my aching muscles and nearly breaking bones. If I concentrated on my torture now, the horrific memories dulled. Each minute that passed felt too long. I could relive what had happened to me in half that time, and it hurt too much. But I had brought it all on myself. In that tiny cell, abandoned once again, I wondered whether everyone had forgotten about me. I wouldn’t blame them if they had. I deserved it. After all, I’d almost killed the man I thought I loved, and gotten my best friend buried six feet underground.

My jaw tightened as pressure built in my lungs. Cold and fear surrounded me once again. I weaved my fingers into my tangled hair, pulling on it as hard as I could. The pain had to make it all go away. If I thought any longer about the thirty days stolen from my life, I’d crumble and never get up, so I pulled as hard as I could until auburn clumps remained in my clenched hands.

Yes, the throb on my scalp helped. Who the fuck would care how I looked in my coffin? Would anyone even show up to my funeral?

And then the warmth of strong arms eased everything. I remembered the same hold from a week ago, when Allie Green risked her life to save me, and then Julian Cross answered my call and came running into the alley. Since the moment he embraced me in his arms that night, Julian’s strength had never truly let go. His caring grip around me eased the shakes. He smoothed his cheek against mine, holding my hair-filled hands between his, pressing his warm lips against my temple and forehead, cooing soothing noises into my ear. The smell of his freshness filled me and I leaned further into him, wondering whether it was just a dream. I prayed that by some miracle, I could relish in his comfort for a bit longer, because I didn’t want my gruesome memories to transfer to the present. Could this be true? Was it really over? And if so, how could his warm body be enough to tie me to life?

I opened my eyes… and there he was, holding me in the safety of my corner; except I wasn’t exactly in my corner. Julian sat behind me with his legs and arms completely wrapped around my body, my back against his bare chest, his cheek pressing to mine. It was still dark outside. I must have woken him.

He repeated those words each time I had an episode. His voice and body always brought me back to the beautiful bedroom in his house. Julian slept on the mattress by the door. He wouldn’t let me leave on my own anywhere, accompanied me to the bathroom, and helped me get dressed when I just stood there, unable to move. Instead of dumping me at a clinic with doctors in white ankle-long aprons, Julian insisted on taking me home, and had cared for me ever since.

I didn’t deserve his compassion or the time he took away from his work. But he said he’d never leave me again. He would never allow another man to steal me from him. Sometimes I wondered whether he was referring to his brother Tristan or to Martinez, the scum who kidnapped me and whom I killed.

A regret I’d held onto for years loomed near my heart. I wanted to tell Julian the truth, but I couldn’t. Not yet.

The nurse told Julian I could be suicidal; which I was. After all, would you want to live if you’d been raped by dozens of men, hit across your face if you were too loud, assaulted in ways no one could ever dream of? I didn’t think I could go on. How do you live after something like that? How do you put the pieces of your shattered body and soul together when you can’t even distinguish your true past from a dream?

But as he held me right there on the floor, the hope I’d once lost grew. His warm skin infused mine with caresses I hadn’t imagined I’d ever have again. The soft lips I’d wanted on mine for years kissed my forehead, cheeks, and shoulders. The gentle touch of Julian’s wide palms around my hands soothed the trembles as my body completely eased into his, letting him hold me like no one ever had. These second long moments were enough to stir new dreams of a possible life. They were enough to pull me out from another relapse.

Layers Off is available at: