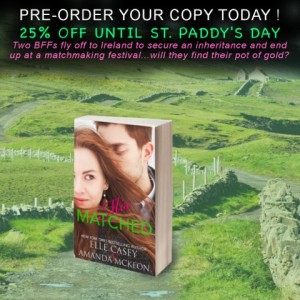 Former college roommates Erin and Ridlee leave Boston for Ireland to track down an inheritance, and end up at a matchmaking festival in Lisdoonvarna. Ridlee's a newly minted attorney, and Erin's part owner of the Pot O' Gold Pub, hoping to buy out her new, mysterious partner, some old Irish guy she'd never heard of before the reading of her late grandmother's will. It seemed like it would be an easy thing to do: show up, find the guy, and make him an offer… But the magic that is Ireland and the people who speak the lilting Irish brogue are as unpredictable as the weather, and things get a little more complicated than the girls anticipated when the town's legendary matchmaker pulls out his leather-bound book and proposes two matches…

What
happens when a Rock Star in Disguise meets a Billionaire in hiding?
Georgie doesn’t know who she is dating.
At a high society wedding, Georgie
Johnson is introduced to Alexandre de Valentinois, a hereditary duke of nothing
who flies around the world on his private planes and describes himself as “one
of those despicable, idle rich men.” But Alexandre is Xan Valentine, rock star
front man for Killer Valentine. He’s famous, but his paparazzi-dogged lifestyle
might get Georgie killed.
Amazon
Barnes & Noble
Google Play
iBooks / iTunes
Kobo
~~~~~~~~~~~~~~~~~~~~~~~~~~~~~~~~~~~~~~~~~~~~~~~~~~~~~~~
Fall
Away
By: Zoe York

Navy SEAL Trick Novak knows he needs to
find a better cure for his insomnia, but a warm body and a pretty smile worked
just fine until he met Gaby Ellis—his latest conquest’s roommate. Now he’s not
sleeping, and he’s definitely not getting laid, but that just means he’s got
more time to plot ways to win over the beautiful and stubborn kindergarten
teacher.
Amazon
(Amazon exclusive – borrow for FREE in
Kindle Unlimited!)
~~~~~~~~~~~~~~~~~~~~~~~~~~~~~~~~~~~~~~~~~~~~~~~~~~~~~~~
Confessions of a Reformed Tom Cat
By: Daisy Prescott

I, Thomas Clifford Donnely, am a manwhore.
You can call me Tom Cat. I’ve been told I’m
irresistible to women. Like catnip for a different kind of pussy-cat.
Tom Donnelly isn't the marrying kind, or the dating kind. When his
sister's best friend Hailey King returns to Whidbey Island, and propositions
Tom for a one-night stand, he breaks one of his biggest rules. It's just sex.
That's what Tom does and does well.
What happens when “just sex” isn't
enough?
This is a standalone romantic comedy.
Amazon
Barnes & Noble
Amazon UK
Amazon CA
iBooks / iTunes
~~~~~~~~~~~~~~~~~~~~~~~~~~~~~~~~~~~~~~~~~~~~~~~~~~~~~~~
Book 1 is FREE! See links below!
NEW: Stormy Day Mystery Book 2
By: Angela Pepper
(the mystery pen name for Peaches Monroe author Mimi Strong)

Stormy Day doesn't let anyone put her down or hold her back, so when Tony
Milano calls her a “snoopy housewife,” he's going to find out EXACTLY
how much trouble a little competition can be.

And then there's Kyle, also known as “Dimples” around the Misty Falls
police station. He's young and adorable. Maybe too young for Stormy? He doesn't
think so. Would he really kidnap a dog for her? Or is the flirting a cover for
something more sinister?

Between falling out of windows, breaking into crime scenes, and putting the
pressure on key witnesses, Stormy Day has her work cut out for her in DEATH OF
A CRAFTY KNITTER, the newest in the Stormy Day Mystery Series by Mimi Strong
(writing under the pen name Angela Pepper).

If you haven't read book 1 yet, what are you waiting for?
BOOK 1 IS FREE ON ALL VENUES
for a limited time:
FREE download on iBooks FREE* on Amazon.com (USA) FREE on Amazon.co.uk (UK) FREE on Nook / Barnes & Noble

I planned the perfect proposal. Plenty
of lobster, caviar, champagne and—her favorite—tiramisu. The perfect setting.
The perfect woman. The perfect everything. And it was perfect. Until Shannon
swallowed the ring.
Amazon
Barnes & Noble
iBooks / iTunes
Kobo
Google Play
Category: Uncategorized
Leave a Reply